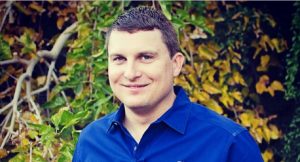 Sean was born near Seattle in Washington State.  He graduated high school, joined the U.S. Army, and was stationed in Germany for three years.  He traveled around Europe when on leave and especially loved the Sistine Chapel, the Globe Theatre, and the Spanish island of Mallorca in the Mediterranean with its beautiful beaches.  After the Army, he attended the University of Washington.  He was privileged enough to do a policy internship for a state senator during a legislative session and learned much about lobbying and the political process.  Upon graduation from the University of Washington, he was a wildland firefighter for the summer and then started a job at a communications company.  In 2009 he moved to Arizona and started working at Zimmer Biomet as an orthopedic sales representative focusing on knee and hip replacements as well as trauma and biologics.  He met his wife, Kasandra, in Arizona and was married in 2015. Kasandra is an Arizona native and comes from a large family of 6 kids. Together they have a young daughter and love family dinners, hiking, road trips, and exploring small Arizona towns.  Sean especially appreciates being able to do this in the sunny Arizona weather having grown up in Washington State.